Cross-Compiling for the Omega

The OpenWRT build system is at the core of our cross compilation efforts; it will build to toolchain which we will then use to cross compile our C or C++ code for the Omega.

In the article on using a C compiler on the Omega, it is mentioned that a limitation of compiling on the Omega is that the compiled programs are limited to using only the C standard libraries since only those header files are included on the Omega’s filesystem as a space-saving measure.
The main advantage to cross compiling as opposed to compiling a program directly on your Omega is two-fold:
your program will be able to use libraries other than the implemented by other OpenWRT software packages, and,
the compilation will likely be much quicker on your computer in the cross compilation environment than on the Omega.

This article will explain how to setup the OpenWRT build system, explain what needs to be done in order to cross compile a program, and then go through an example of cross compilation.

Setting Up the Build System

Note: Onion is not responsible for any damage or issues caused by using firmware or packages that do not originate from Onion.

To start, we will need to setup the OpenWRT build system on your computer, configure it for the Omega, and then build the toolchain. We’ve had success with this procedure on Ubuntu Linux, we strongly recommend following suit. Use a virtual machine if you don’t have a native installation.

Our guide is loosely based on OpenWRT’s own build system installation instructions, check their instructions out if something is unclear.

The OpenWRT build system requires quite a few packages, in your Linux environment, run the following command:

This may take some time!

Use git to download the build system customized by Onion for the Omega2:

This will take some time but not nearly as much as the previous step!

Ok, now we need to setup the build system so that it’s configured for the Omega2 and Omega2+.

Go into the source directory and start the build system menu: 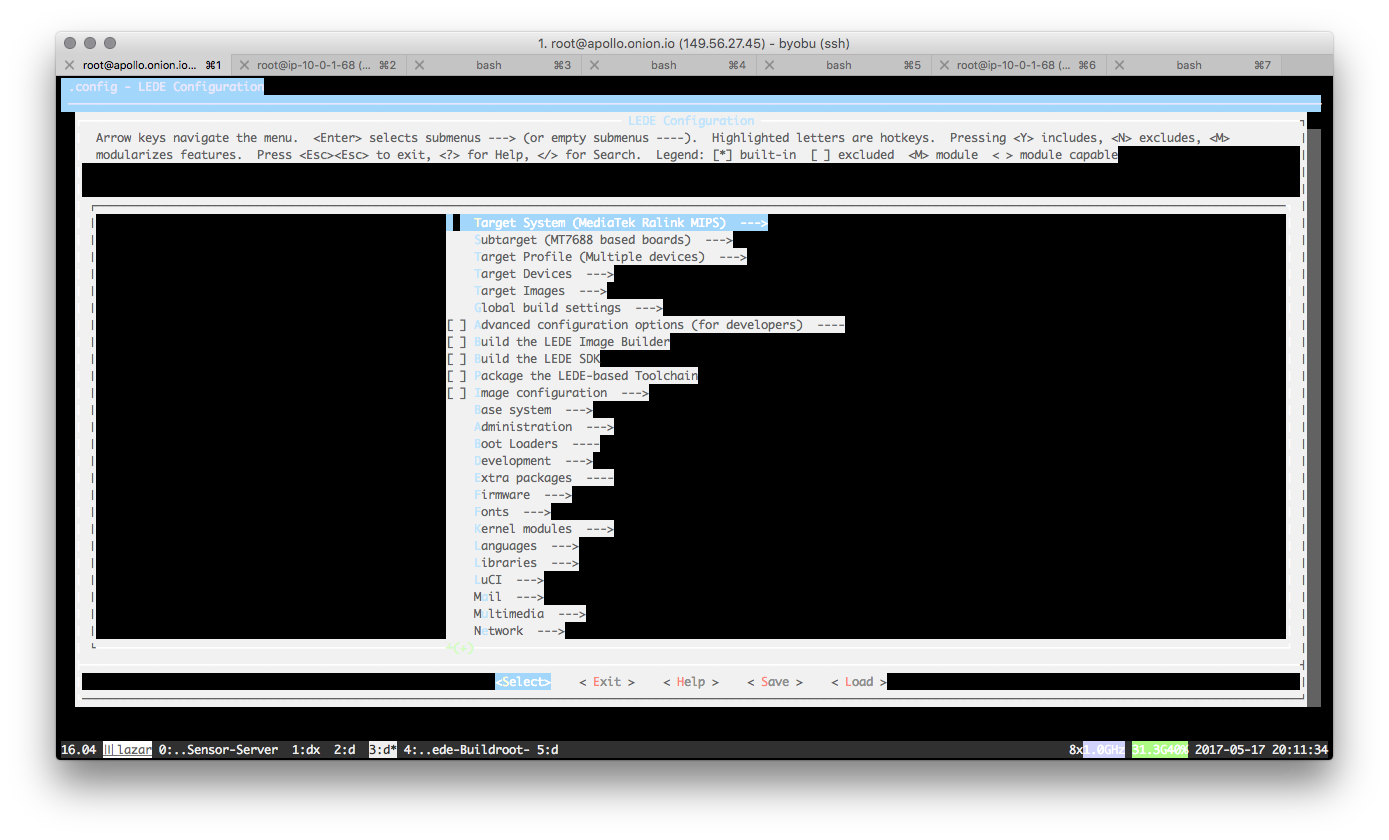 In the menu that appears, you will need to do the following:

Now your OpenWRT build system is configured to create a toolchain, firmware, and packages that are compatible with the Omega2 and Omega2+!

The only thing that’s left is to compile the toolchain. The build system is based on makefiles, so a simple command will start the process:

If you have a bleeding edge processor that can handle a bunch of threads, you can use the following command:

Where the 8 defines the number of compilation jobs to run simultaneously.

Now that the toolchain is built, we can use it to cross compile our own programs.

The process for cross compiling is straight-forward, we just need to ensure the following things when compiling:

The above requirements can be achieved in several different ways:

See this cross-compilation guide for ideas on how to accomplish the first two method. See our example below on how to implement the third method.

This example will illustrate how a C project can be cross compiled for the Omega using a generic Makefile and a script to invoke the Makefile such that it outputs a cross-compiled binary executable. The code for the example is available in Onion’s c-cross-compile-example repo on GitHub.

The C program uses the libugpio library to read and print the input value on a user-specified GPIO pin once a second for 20 seconds. As previously mentioned, this program cannot be compiled on the Omega since only the C standard library header files are included on the Omega’s filesystem. We could copy over the header files to the Omega but cross compilation is the better and more scalable option.

To accomplish this the user needs to run the script with arguments that define where the OpenWRT build system can be found and which libraries need to be linked:

For this example program, assuming the OpenWRT build system can be found at /root/source, the command would be as follows:

This will result in a cross compiled executable, gpioRead.

Let’s take a closer look at it:

Success! We’ve cross compiled a program for the Omega! Transfer the file to your Omega, use chmod +x gpioRead to give it executable permissions, and run it with ./gpioRead.