We’ll first cover how to setup your computer and Omega, and then move on to cover how to actually flash your Arduino Dock.

You’ll need to first make sure that your Omega has connected to internet.

Then you’ll want to ssh into the Omega’s terminal in order to install the arduino dock package.

We’ve written a guide to connecting to your Omega’s terminal via SSH in case you don’t know how!

To install this package you’ll need to use opkg. Enter the following commands on the command-line:

The Omega must be accessible via its URL http://omega-ABCD.local where ABCD is your Omega’s unique code.

The requirements vary depending on your Operating System:

This has to be done just once to enable flashing wirelessly.

Install the latest Arduino IDE from the good folks over at Arduino. We did all of our testing using Version 1.8.0.

Open the Arduino IDE and go to File -> Preferences. Copy this URL to our Arduino Dock device profile:

And paste it into the Additional Boards Manager URLs section near the bottom of the window. 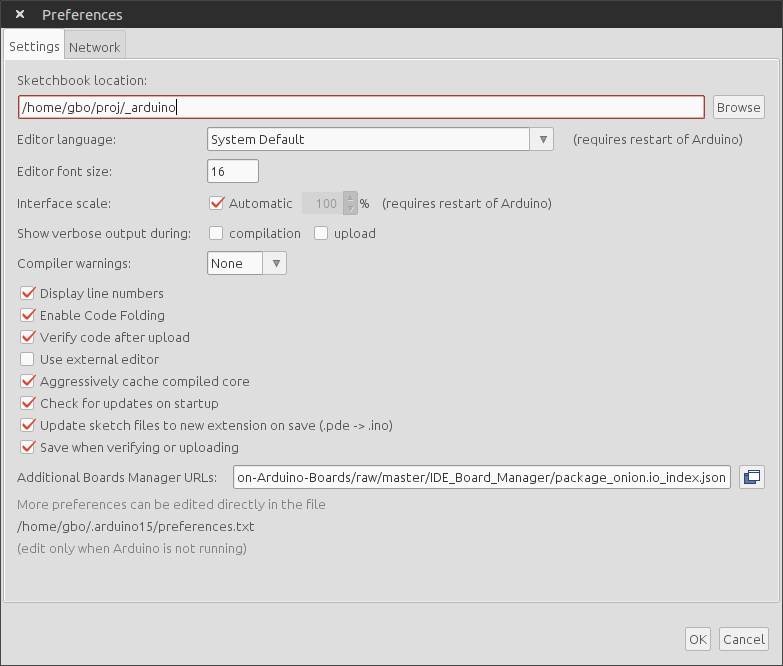 If you already have links to other custom boards in your IDE, click on the button on the right of the text box. You can then add the URL in a new line.

Click OK, then go to Tools -> Boards -> Board Manager (at the top of the menu). In the search bar, type “Onion” and hit Enter. When the Onion Arduino Dock entry pops up, click on Install. Click on Close to return to the IDE. The editor will now download the settings for the Arduino Dock and make it available as a board in the Tools -> Boards menu!

Now we get to the fun part, flashing sketches to the ATmega chip!

There are two methods for flashing the ATmega328P chip using the Omega:

Wireless Flashing with the Arduino IDE

The process that takes place with this method:

In the Arduino Tools menu, select “Onion Arduino Dock” for the Board (near the bottom of the menu), and your Omega-ABCD hostname as the Port: 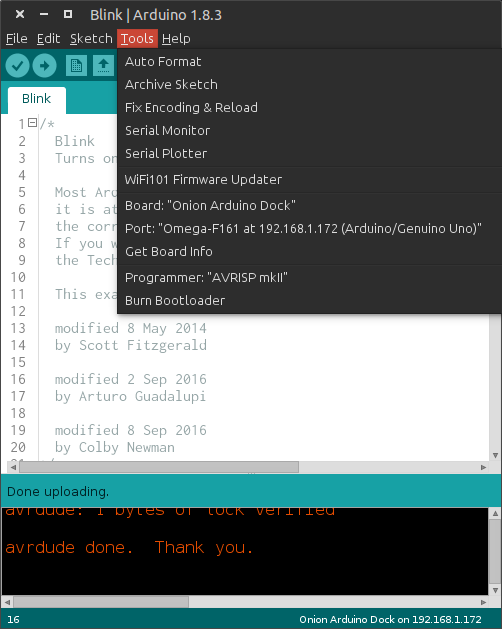 If your Omega does not show up in the Port menu as a network port, restart the Arduino and wait for 30 seconds:

When your sketch is ready, hit the Upload button. Once the sketch is compiled, it will prompt you for your Omega password to upload the sketch. The password is onioneer by default: The IDE actually creates an SSH connection with the Omega to transfer the compiled hex file, and the Omega with then flash the ATmega microcontroller using 4 GPIOs.

Once the upload completes, the info screen will show something along the lines of:

The ATmega chip is now running your sketch, enjoy!

Note: An orange message saying ash: merge-sketch-with-bootloader.lua: not found may appear in the info screen. You can safely ignore this message, it does not affect the sketch upload.

Manually Flashing on the Command line

Like we mentioned before this method should only be used as a backup to using the Arduino IDE. This is handy if the Arduino IDE cannot detect your Omega as a Network Port due to any connection/setup issues. Hit the verify button to compile the sketch, once it’s complete you will have to scroll to the right to find the path to the compiled hex file:

Copy this path and then transfer the file to your Omega.

Now that the hex file is on your Omega, you can flash it to the ATmega chip from the Omega’s terminal:

The sketch has been flashing and is running on the Arduino Dock, enjoy!