Developing programs for the Omega using the command-line is a very practical option because of the powerful tools included on the Omega, but at first it can be a little intimidating to use the command line. This tutorial will help you get started developing code on the Omega’s command line and will show you that it’s not so scary after all!

In this tutorial we’re going to write a script that will blink the Omega’s LED in morse code based on the user’s input using the Omega’s command-line interface.

In order to develop programs on the command-line, you’ll need access to a terminal so either SSH into the Omega’s command-line, or connect serially.

Controlling the LED from the Terminal

Depending on which Terminal app you’re using, the keyboard shortcut to paste might not be the straight-forward Ctrl+v or Cmd+v on a Mac. Some Windows terminal programs use Ctrl+Shift+v as the paste shortcut!

Writing a Shell Script in the Terminal using vi

Create a file called morse.sh in the root directory using the following command:

You’ll open an empty file. To start typing you can enter a.

Copy the code below into the terminal.

Now to save the file you’ll have to enter the Command Mode by hitting the ESC button on your keyboard.

The Command Mode of vi allows you to enter keys to perform commands such as saving and exiting, exiting without saving, or deleting lines.

Type :wq and hit enter to save and exit your file. 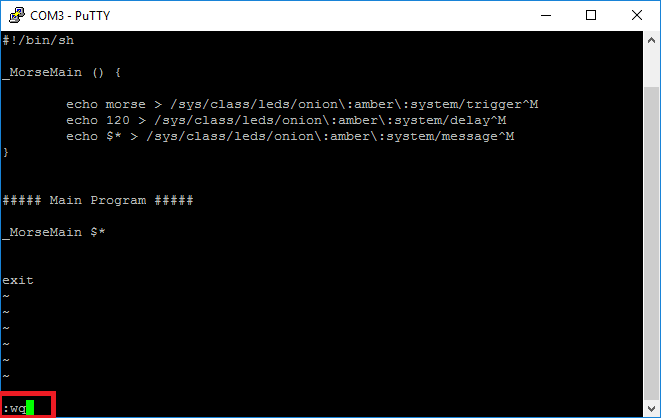 Running your Script in the Terminal

To run your Script enter the following command to run your script: