“Alright, we’ve blinked one LED, should we try a second?”

Here’s the diagram of our circuit for reference: 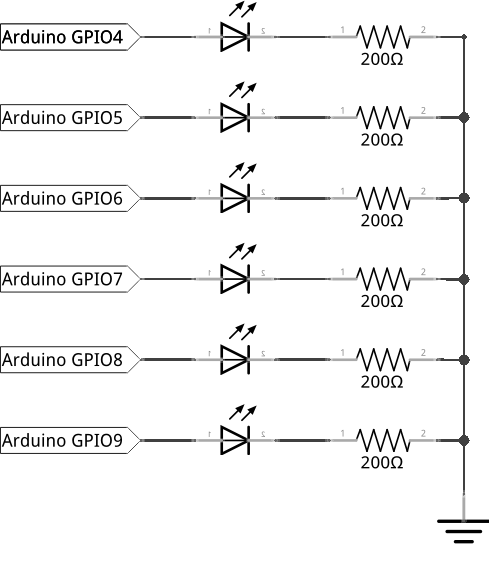 While the individual LEDs will be connected in exactly the same way as in the first experiment, we’re going to be using the rails on the breadboard to make the wiring a little simpler. Here rails aren’t of the train variety - they’re the four vertically connected columns on each side of the breadboard. You’ll see in a second why they’re super handy.

To get started, let’s grab six LEDs and let’s do the following for each one:

You can probably guess that the column labelled + will be used to share a power supply. We’ll be calling it the Vcc rail often in the future!

Once you’ve done the above for all six LEDs, let’s connect a jumper wire from the GND rail on the breadboard to a Ground pin on the Omega - those will be labelled GND. Since the two red and blue rails are connected vertically, what we’ve done is connect all of the LED cathodes to the Ground using just one pin on the Arduino Dock.

Once your done, the circuit should look something like this: 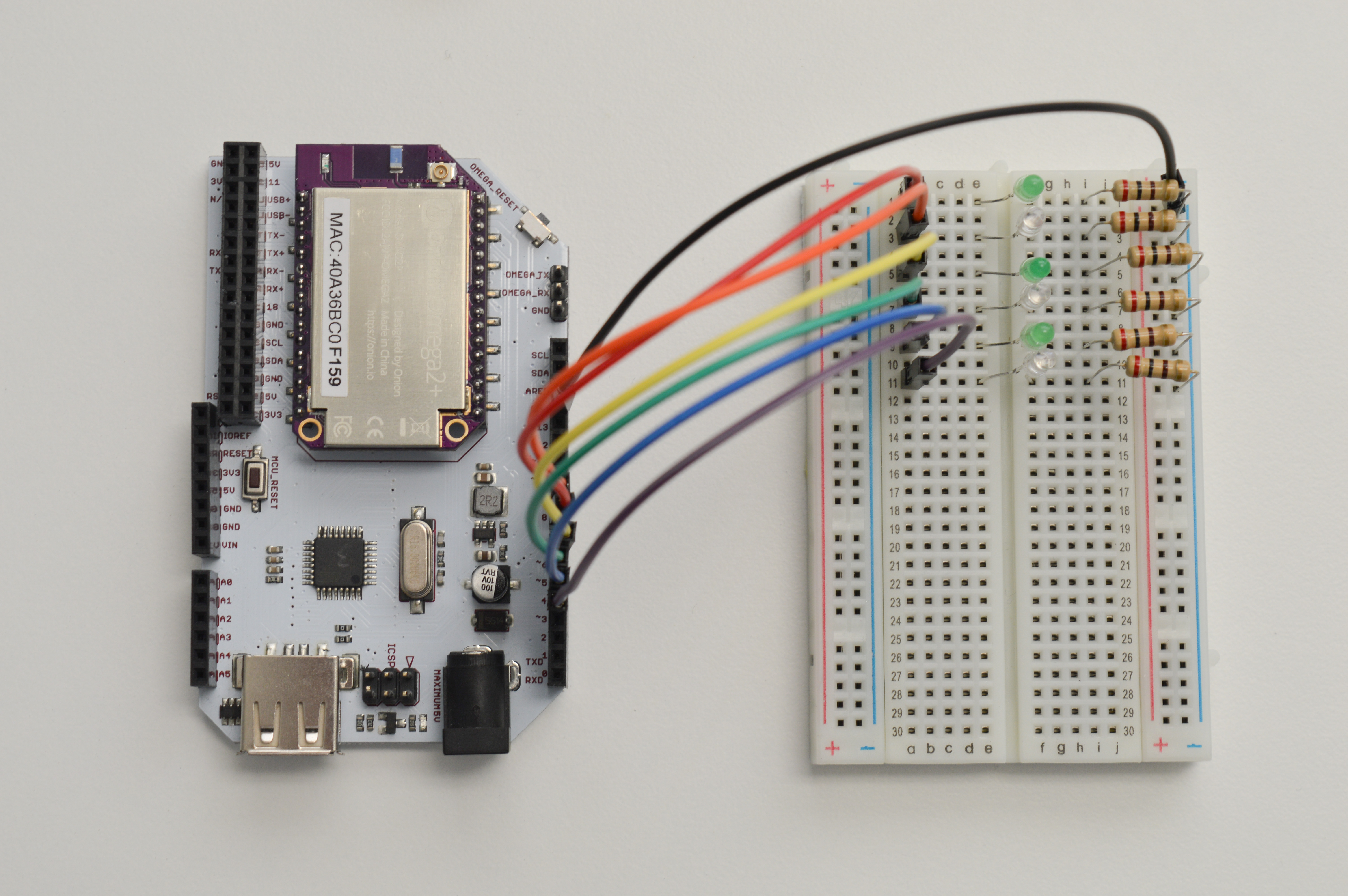 Now let’s operate the LEDs with some programming. We’ll write an Arduino sketch that turns the LEDs on one-by-one, then turns them off in the same order.

Let’s save the code below as SKA02-multipleLeds.ino:

In this code, we get getto see the difference adding more LEDs make. Turns out not too much! We use a couple of new concepts to do more things with very similar code - we declared the pins as an array, and used for-loops to do the same thing over and over again. Let’s take a look.

In the second line of our code, we defined the ledPins[] variable. It looks a little different from the variables we’ve encountered up to now. The pair of square brackets ([]) here tells the computer to make ledPins an array.

So far, we’ve interacted with int variables - representing an integer number in memory. Later, we’ll deal with char variables to represent characters. But an array isn’t really the same as those two. An array is a list of variables, with the ability to access each individual variable - they can be of any type. A single variable in an array is referred to as an element.

The ledPins array is meant to hold the GPIO pin numbers that control our LEDs. So the ledPins array will hold a bunch of integers as declared first thing in that line. In addition to that, we’re populating the array as soon as we declare it by assigning it a value of {9, 8, 7, 6, 5, 4} with the equals sign.

We won’t cover what happens when you don’t, as that’s a very large tangent. If you want to know more about why, look up ‘dynamic memory allocation’ and ‘malloc()’.

As a bit of background, loops are programming constructs that repeatedly run a block code until some condition is no longer met. Loops are incredibly common in literally every type and form of programming. We already saw an example of it in the previous tutorial where we talked about the loop() function. Naturally, we can create our own loops with custom conditions.

For our program, we need to perform 3 actions on each pin. First, we set the mode to output, then we turn it on, and finally we turn it off. Let’s say we want to turn all the pins off: without looping, we’ll have to write digitalWrite(ledPins[0], HIGH); once for each LED we’re running, that’s six times for this circuit!

Instead of doing that, we can use what we know about the LED array to make a loop. Enter, the for-loop:

This is what the header of a for-loop looks like

The for in the beginning is a keyword, it signifies the beginning of a loop. The brackets () enclose the setup of the loop. In the case of the for-loop, there’s three parts to the setup separated by semi-colons.

The first part (int thisPin = 0;) declares a counter variable storing the number of iteraitons so far. We initialize it as 0 because our array begins at 0 (you might see where this is going already).

The second part (thisPin < pinCount) is the condition statement. Note that it isn’t a stopping condition! It is a continue condition, meaning the loop stops if and only if the condition becomes false (or evaluates to 0). For our case, we want to run the loop until the counter is at the last element of the array. This is why the condition compares the current iteration number with the total number of pins we have. We declared a variable called pinCount at the start so we have it handy for exactly this purpose.

The third part (thisPin++) is code that runs after each iteration. In our code, we want to increment our counter by one every cycle so we go through all the elements of the array one-by-one

If you’re wondering why we make the program sleep for a second during each loop iteration, it’s because computers execute program code really fast. Try increasing, decreasing, or getting rid of the sleep instruction altogether and rerunning the program. See what happens with our LEDs.