So far, our programs have been looping continuously without stopping. In this tutorial, we get it to stop and listen for once! We’ll be writing code that will patiently listen for an event, and perform an action only when it happens. We will still be using physical input to control our software, however this time instead of a trimpot we will be using a push button. Along the way, we’re also going to learn about bitwise operations.

Unlike the SPDT switches with levers, the push button switches in your Kit are the single pole single throw type, or SPST. It’s named this way because:

For example, the buttons on TV remotes are all momentary push button type switches, so expect the same type of functionality (changing settings) with push buttons in our experiments and projects.

You may be wondering, “If there are four pins, how come this switch doesn’t have two switch contacts?” This is because the button is made of two pairs of connected pins that split each end into two connections. The photo below shows which pins are connected, so take note that your circuit properly switches when it’s supposed to:

To simplify our circuits, we assume switches cleanly change state when you push or flip them. However, in real life with real physics, the electrical contacts of switches don’t work exactly the way we would like. When changing state, the electrical contacts will rapidly connect and disconnect like mini sparks as they just start to touch (when closing) or separate (when opening), until settling to their final value. This is known as bouncing. The graph below shows an example of a switch closing with respect to time: notice how the switch rapidly bounces betweeb OFF (low) to ON (high) repeatedly until settling at ON.

We want to avoid this since it will wreak havoc on our software that treats the button as a trigger for an action. When we press the button once, we expect the action to trigger only once; however, because the signal is bouncing, the action may be triggered tens or even hundreds of times. While this may not be an issue for simple actions such as turning on an LED, this can cause huge problems in more complex systems, such as programs that send messages to each other. For example, you don’t want to press a button to lower the thermostat by 1° and have it lower by 12!

One way to solve this problem, or debounce the signal, is to add a few simple components around the switch to filter out these unwanted bounces. The diagram below shows a way of doing this. 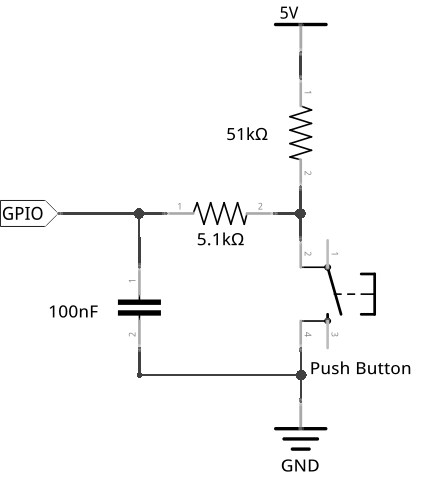 Something to keep in mind about this setup is that the input reads HIGH when the switch is open, and LOW when the switch is closed. This may seem backwards at first, but this convention is actually very common with integrated circuits out in the wild! When writing programs, you should abstract this convention away from the main routines by using functions that return TRUE or FALSE depending on how you define the switch state, not the signal itself.

We’ve added 2 resistors, which limit the current (or charge flow) through the circuit, and a capacitor, which can store and release electrical charge. Here’s how it works:

When working with the Omega’s GPIOs and 3.3V HIGH signal, use the following components to build the debouncer:

Add these to your switch circuitry to get rid of those pesky bounces!

This is a powerful tool since we can use interrupts in our programs to perform an action only when a certain trigger is detected (like a button being pressed), while allowing the rest of the program to behave normally.

For this experiment we will start with the circuit from the multiple LEDs tutorial and add a push-button along with it’s debouncing circuit. The push-button will be connected to a ATmega pin which is capable of triggering external interrupts (only pin 2 or 3 for ATmega328). The push button will be used as input (either pressed or not pressed) and the LEDs will animate the the button presses 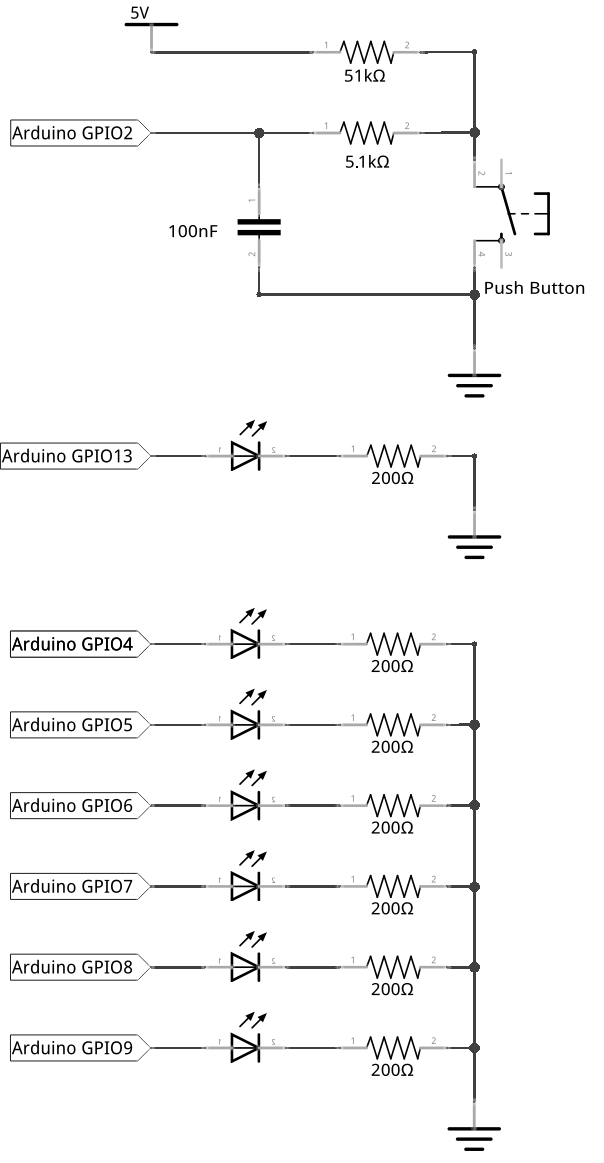 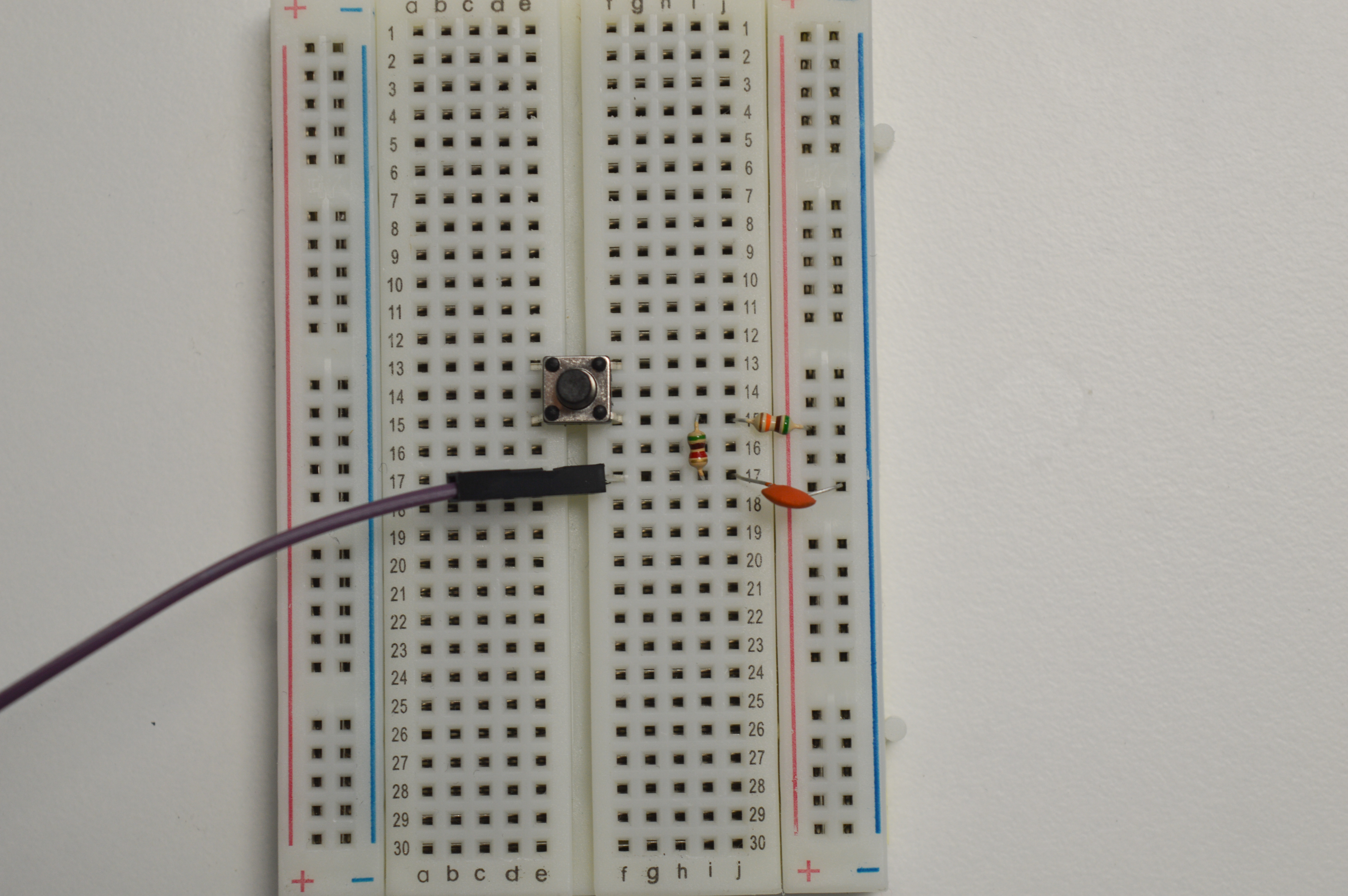 Now let’s connect the circuit to the Dock: 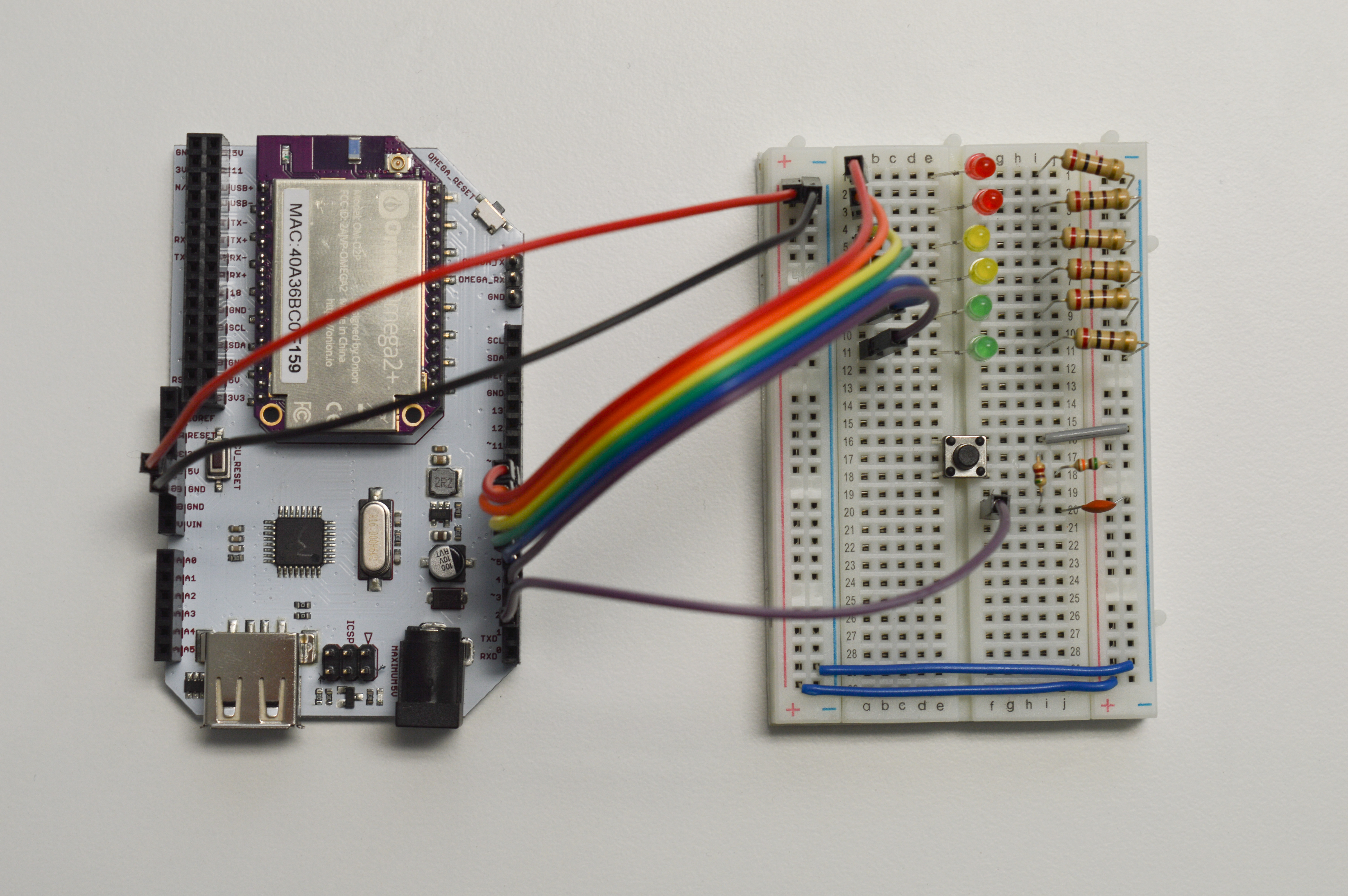 The loop() part of this program only makes the LED flash on and off. The rest of the behavior is set to trigger on a hardware interrupt, meaning only when a signal on a pin changes state!

Copy the code below and flash it to give it a spin.

You know the drill, save it to SKA04-readingPushButton.ino, then get ready to press a button!

In this code, we wrote our main LED button function to execute on an interrupt instead of using polling as in the previous tutorial. We also use bitwise operations to work with binary numbers, whose digits can only be either 1 (HIGH) or 0 (LOW), to help us manipulate our LEDs more easily.

Interrupts are a different way of executing code. They are used to run code in response to an input event that could happen at any time.

To illustrate how interrupts work, let’s imagine you’re at home watching videos on YouTube; this is your loop() function. Suddenly the doorbell rings, it’s pizza delivery! You then do the following:

Since this method does not require the controller to repeatedly poll inputs, interrupts reduce the need for processor time and make your code easier to write.

In our code, we attach a interrupt to one of the pins using the built-in Arduino function attachInterrupt(). This function takes in three arguments:

Interrupts can also be attached to timers which will trigger an ISR every n microseconds. This method is not covered in this experiment, but you can find the details in the Arduino Timer documentation.

Binary numbers are numbers whose digits can only be 1 or 0. You can write a binary number in an Arduino sketch by adding a B in front of it, such as B00101001. See the below table for the first few binary numbers:

and so on. The number of 0s in front of the number do not affect the number’s value.

Binary numbers with 8 digits are known as bytes. You can declare byte-type variables in Arduino if you want to limit their size to only 8 bits. In our case, that’s more than enough, so we declare a byte variable called ledValues.

Bits are typically numbered from right to left. Thus, the first bit of a number would be the one on the farthest right, the 2nd would be on its left, and so on.

For in-depth reference, check out this Bit Math in the Arduino Playground.

In our case, we’re not interested in the decimal values of binary numbers, but in where the 1s and 0s appear. If we think of the 1s as HIGH signals and 0s as LOW, then a binary number can be used to represent the states of our LEDs!

We can manipulate these digits using bitwise operations. These operations compare the individual bits in two binary numbers. Let’s go through some examples in the code where they appear.

Bitshifting is moving the bits in a binary number left or right. The bitshift operators are << for shifting left, and >> for shifting right. To bitshift any binary number, specify the number of places to move. See the following example:

When shifting a number to the left, 0s are inserted from the right, and vice versa when shifting to the right.

Note: This is not the boolean AND, &&, which is used to evaluate true or false conditions.

If a particular bit is 1 in both of the two numbers, then the resulting number will also have a 1 in that bit; otherwise, it will be 0. For example:

This is typically used to check the values of individual bits. In the following if statement:

This operation is similar to multiplying two bits together. Think of it like asking, “Is this bit a 1 in either the first OR second number?”

This operator looks like an l, but is actually a straight vertical bar! You can typically enter it by pressing Shift-\ on most keyboards.

Note: This is not the boolean OR, ||, which is used to evaluate true or false conditions.

If a particular bit is 1 in either of the two numbers, then the resulting number will also have a 1 in that bit; otherwise, it will be 0. For example:

In the following line:

we are shifting ledValues to the left by one place, causing a 0 to appear in the first bit. We then OR it with B00000001, effectively “adding” a 1 to that bit. This process is repeated until all the LEDs are on.

This operation is similar to adding two bits, except that there is no “carry over” like in standard addition. Think of it like asking, “Is this bit a 1 in either the first OR second number?”

The changes in ledValue as you press the button are summarized in the table below: