The 1-Wire protocol is a bus-based protocol that uses, as the name implies, one data wire to transmit data between devices. It’s similar to the I2C protocol, but it has a longer range and a lower data rate.

It follows a master-slave architecture with each bus allowing for one master, in this case the Omega, and many slave devices. Every device type has its own unique single-byte (8 bit) identifier, eg. 0x8f. Each device in turn has its own unique 8-byte (64-bit) serial number that includes a byte to describe the device type, known as the family code, as the Least Significant Byte. An example of a serial number is shown below:

The protocol may also be found written as One Wire, One-Wire, or sometimes 1W. For consistency, we’ll be using 1-Wire in this and other guides. In code, we’ll use oneWire or OneWire because variable names cannot start with numbers in Python (and several other programming languages as well).

To make 1-Wire work with the Omega, we must first label a GPIO as a 1-Wire master bus. This will be the main contact point between the Omega and any 1-Wire devices. Once we have the master bus set up, we can then scan for the sensor through it and read from the sensor as needed.

The Omega does not have a dedicated hardware controller for this protocol, so we’ll have to send some low level instructions directly to the bus. This will be a good opportunity to learn about the process of reading and writing files.

The DS18B20 sensor is a 1-Wire digital output sensor with high accuracy. The pin layouts can be found in the diagram below:

The Vdd and GND pins are for power and ground, and the DQ pin is the data line (both input and output).

You will typically need a pullup resistor (approximately 5.1kΩ at 3.3V) between the DQ and Vdd lines so that you can properly read the sensor’s output.

Note: We will treat the flat side as the front.

We’ll be building a circuit to connect the 1-Wire temperature sensor to the Omega. As the name implies, only one data line is needed for communication between any and all devices on the bus!

Here’s a diagram of the circuit we’ll be building: 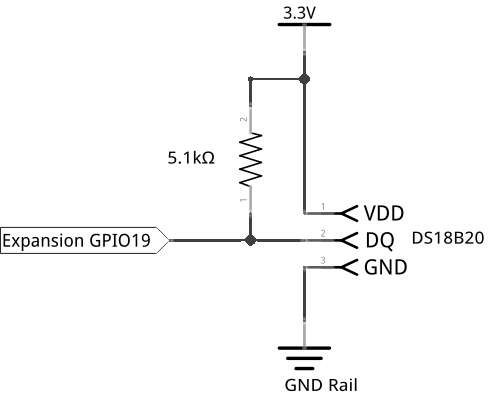 The reason we have this resistor is to make sure the max voltage of the DQ pin is equal to the voltage provided by Vcc. If it isn’t properly referenced, a HIGH from the DATA line might appear to be LOW, making the data untrustworthy! 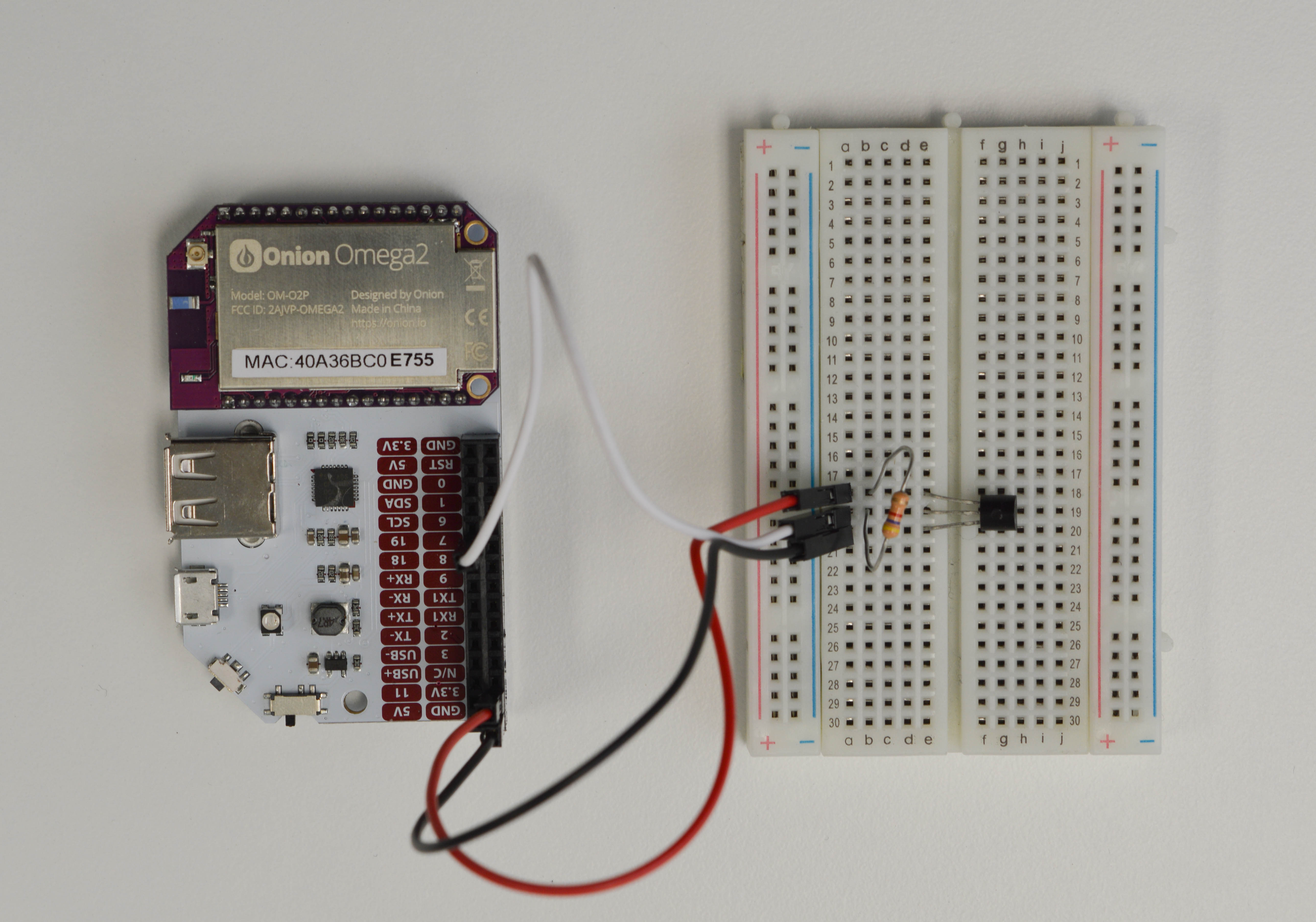 GPIO19 was chosen rather arbitrarily. This will work with other GPIO pins as well. Just make sure to use a pin that is a GPIO by default (more details on that here). Be aware that you’ll need to modify the code below to specify your chosen.

First, let’s create a base class for any generic 1-Wire device. This class will handle all the file reading and writing needed to interface with 1-Wire devices. Creating an object of this class will associate a GPIO pin with a 1-Wire bus, and the object will act as a clean interface between code and the low level 1-Wire functions. This is exactly how libraries are written!

Create a file called oneWire.py and paste the following code in it:

Let’s create a file called temperatureSensor.py to hold some more code. This file will implement a TemperatureSensor class. Objects of this class will represent a single DS18B20 sensor in code. Like in our previous experiments, we’ll instantiate a OneWire object inside the TemperatureSensor class. The class functions will then send it the signals that we want and retrieve response data from the sensor without us having to worry about the underlying 1-Wire functions. This way we can focus on the logic of what to do with the data.

Now let’s write the script for the main routine. Create a file called STK08-temp-sensor.py and paste the following in it. This script will use the two classes we’ve created to continuously check the sensor and display the data to the console. Through abstracting out the details into two other classes, this script can be short and sweet.

If you just did the Seven Segment experiment, you may need to free up your GPIOs in the filesystem. Run the unexport commands outlined in the previous experiment before continuing.

Now run the STK08-temp-sensor.py script and watch the terminal for output.

You should see the Omega printing the temperature in degrees Celsius measured by the sensor once every second. Try pinching the sensor with your fingers and seeing what happens!

Here we control a 1-Wire device through the Omega’s filesystem by reading and writing files. We also introduce the concept of scanning a bus for devices and device addresses. We’ll also explain the __name__ == '__main__' concept - what it does, and when should you use it.

Hardware and the Omega’s Filesystem

The Omega’s hardware such as the serial ports, I2C, and SPI bus are exposed as files somewhere in the system (in fact, this is true for most Linux systems). In order for software and programs to interact with these connections, they must work with the corresponding files by reading and writing. This is a very important concept, so please make sure to remember it!

When working with a file from within a program, you must go through the following steps:

This applies to all programs that interact with the filesystem, not just Python.

Hardware connected to the Omega’s ports are represented by ‘virtual’ files in the system, usually listed under /sys/devices. The process to interact with them directly is to read and write to those files!

Our 1-Wire connection is first initialized as a file through this line in oneWire.py:

This calls a system command (insmod) to set a specific GPIO to act as a 1-Wire master bus. The command sets up the specified GPIO as a virtual file that we can then read and write to as a 1-Wire interface - /sys/devices/w1_bus_master1.

To work with the 1-Wire file, we take advantage of Python’s with statement. This allows us to cleanly open the file and automatically close it when we’re done! Here’s an example of all of this happening in the oneWire.py file:

This simple 2-line block reads from the slave’s system file at /sys/devices/w1_bus_master1/<address>/w1_slave", which triggers the Omega to physically send a request to the 1-Wire sensor and return the data to our program. The file is then automatically closed once the program exits that block. Here, the slave object is a Python File Object and we read it just as we would a regular file!

You may have noticed that the the OneWire class is used by the TemperatureSensor class and should not need to be imported explicitly. However, for the purposes of this experiment, we included it in the main script to use its scanOneAddress() function.

This is because every 1-Wire sensor has its own unique address. To work with a sensor from within a program, you would have to manually find the address and write it in your code as a variable. To make this process faster:

This is all done automatically to save you time.

If you want to find the address of a 1-Wire device to write it down for later, follow these steps:

The device’s address will then be printed on the screen.

Python Modules and the __main__ Function

Any Python code file can be both executed directly, or imported as a module. When a module is imported, all of the code contained within it is executed and any functions or classes are made available to the program that imports it. But what if your module had functions that you want to run by executing the module directly, but not when it’s imported?

Loosely speaking, every file in Python has a hidden __name__ variable. When the file is imported, the value of __name__ is set to the name of the module. For example if your file is called file.py, __name__ will be 'file'. However if the file is run by calling python file.py, Python will set the __name__ variable to '__main__'.

Using this behaviour we can make sure importing a module is silent, while any code we want executed when we run the file will still be executed. We do this by placing whatever code we wish to execute by running the file in a function, and checking the __name__ variable to decide whether to call that function or not.

You can see this happening in two places in our code. First we define the __main__() function, and put all the code we would like to be run inside it:

After that, we check the __name__ variable to run the code only when it’s executed:

That’s it! Now STK08-tempSensor.py can be imported as a module without running its code immediately on import. You can apply this technique to extend scripts that you’ve previously written and reuse them in later files.

Next: Controlling an LED Screen