The Omega’s operating system (OS) is based on Linux, a popular open-source OS that powers servers and computers all over the world. The version on the Omega is a minimalistic and lightweight distribution called LEDE, which stands for Linux Embedded Development Environment. It supports many programming languages and and can run all kinds of complex projects while still being small enough to fit in the Omega’s memory.

We interact and operate the Omega by using the command line interface (CLI). The CLI is the user’s access point into the operating system using a text-based terminal program. All user interaction is interpreted and executed by the OS through instructions, or commands. A user enters a command into a terminal to make something happen.

The CLI can look something like the picture below. In this terminal program on Windows, the green box is where the commands you type will be displayed on the screen. 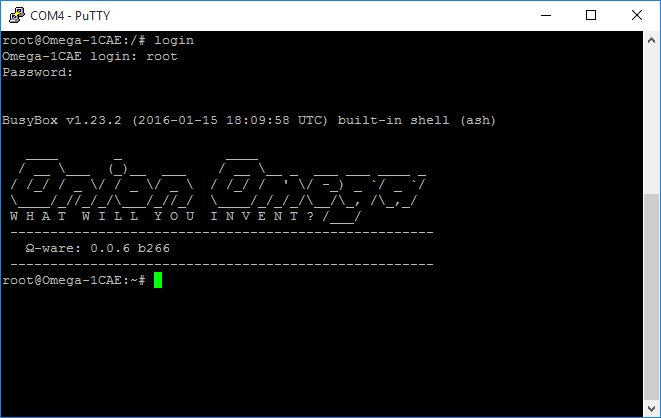 We’ll cover how to do the following:

In Linux, everything is a file. So naturally, the file system is where a great deal happens. The filesystem of LEDE is organized like a tree. At the very bottom of a tree is the root, and so it is with our filesystem.

/ is the universal symbol for the very bottom of the filesystem - the root directory. All the files that the OS has access to can be found under some directory under /.

This is not to be confused with the root directory. In LEDE, every user gets their own ‘home’ directory to store all their personal files. On the Omega, this is located at /root/ by default. When we connect to Omegas’ command line via ssh, we connect as the root and get placed inside the /root/ folder. (Connecting via serial will place us in /.)

In Linux systems, ~ is an alias for the home directory, and can be used in scripts and programs. For example, calling a file in ~/myProject is equivalent to calling /root/myProject.

On the Omega, all the contents in the /root/ directory will be preserved through any firmware updates. So for our experiments, we’ll try to store our files in there so they stay put!

Navigation usually consists of finding our location, looking for landmarks, and then setting a course for our destination. To that end, we’ll look at the pwd, ls, and cd commands to let us do just that.

Locating Ourselves in the Filesystem

When we first drop into the command line, we don’t get a lot of information about where we are. We only really know that we’re in root@omega-ABCD. The pwd command will tell us exactly where we are relative to /

Immediately after logging in, pwd should return something like this:

This tells us we’re in the /root/ folder, one level down from /. Notice that the prompt (all the things before #) already tells us where we are, the ~ is exactly our working directory /root.

What’s in a Directory?

Now that we know where we are, we should take a look at our surroundings. To list out every file in a directory, the ls command is our go to.

For example, on one of Onion’s office Omegas, this is what ls outputs:

But wait, there’s more! Not only can ls list the working directory, if we give it a path, it can also peek into that path.

A path is the full location of something in the filesystem, starting from the root.

Let’s say we want to take a look into our / directory, we can append / as an argument like so:

The prompt tells us we’re still in ~, but those are folders in /.

You can Get There from Here

Of course we can’t stay in the same working directory forever. We can move around directories using the cd command. It stands for change directory.

The most frequent use of cd is in conjunction with a path as the argument, like so:

This command changes the present working directory to /root.

Earlier, we mentioned the idea of a ‘path’ in passing. A path (or ‘absolute path’) is like the full address to something in the file system. For example, if you have a directory called kittens in your /root folder, the path of that directory is /root/kittens. Similarly, for a file called adorable.jpg in /root/kittens, the path would be /root/kittens/adorable.jpg.

Typing out the full path everything can become tedious, so there are many shortcuts that cd can understand in the form of ‘relative paths’. There are some path aliases that change where it leads depending on the context.

All of the shortcuts above work with each other too!

Let’s say we want to move two directories up:

The first .. expands to ‘up one level’, and in that directory, .. again will of course take us back up once more.

We can also move to other directories contained in parent directories. If .. had a directory called puppies, we could run:

If we want to cd up and sideways into the kittens directory, we can use the path ../kittens - up one level, and into kittens below.

Interacting with the Filesystem

Navigating is very useful, but doing things with files is what gets projects working! So to do that, we’ll go over commands to create and delete directories, and creating and removing files.

We’ll cover the mkdir and touch commands to create things, and the rm command to get rid of them.

The mkdir command allows us to create empty directories. Run it like so:

You can use both relative and absolute paths. See the example below:

The touch command can be used to create files. The syntax looks like this:

You can check the file’s last modified time using ls -l like in the example below:

Delete a file using the rm command like so:

To delete a directory and all of the files inside it, run:

These two options are explained below: