Isolated Control with the Relay Expansion

In this expriment, we’ll use a switch with the Omega Relay Expansion to turn a buzzer on or off. Along the way, we’ll be looking into why relays are useful, and go into more detail regarding pitfalls when interacting with hardware.

The Omega is designed to handle around 3.3V and the Docks up to 5V. Attempting to directly control 120V appliances like lights, kettles, garage doors will almost certainly fry the Omega. So how can you automate these household appliances with an Omega?

Enter the Relay! A relay is a mechanical switch that is triggered electronically. This physically separates the circuit that switches and the circuit that the switch controls. The Relay Expansion is designed to isolate the Omega and the Dock (the switching circuit) from the controlled circuits. Turning lights on and off, opening the garage, and resetting wireless routers are all kinds of possible with the Relay. 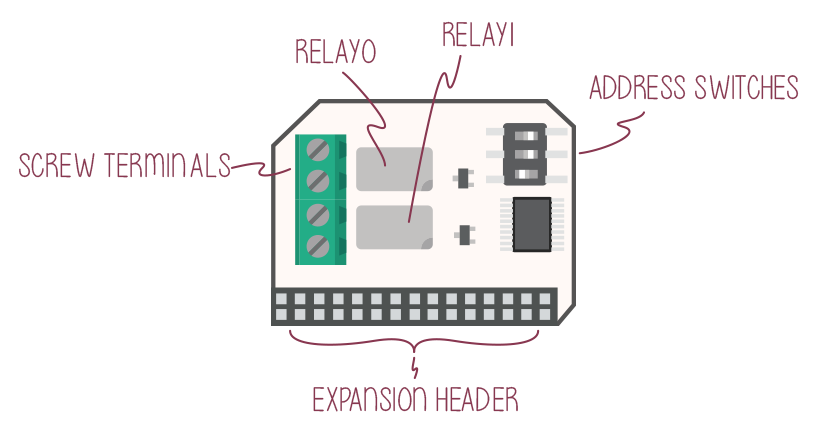 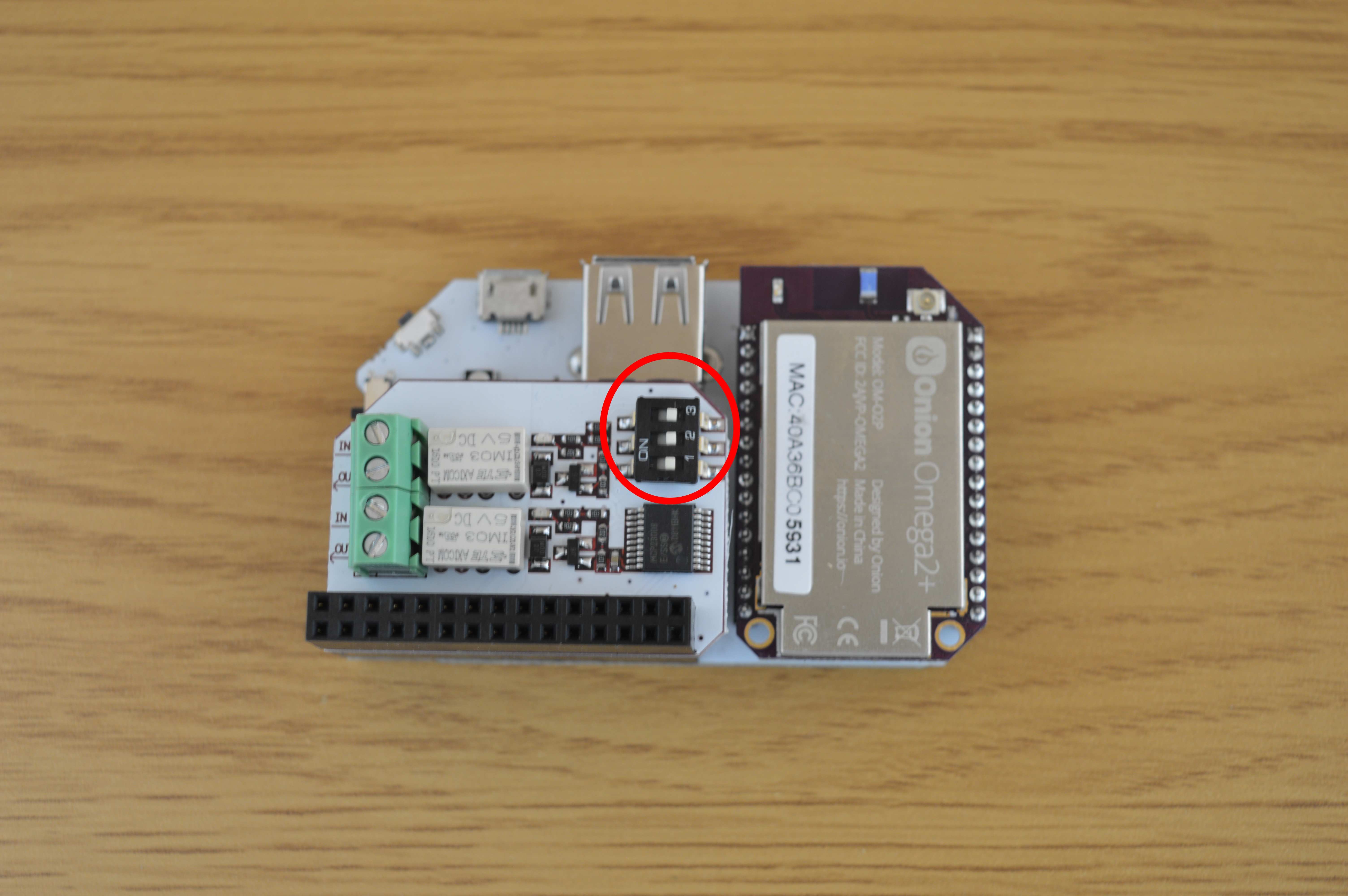 The Relay Expansion allows you to switch very high powered circuits. This experiment doesn’t involve any high voltage circuits, but if you wish to go beyond what we’ll learn here, we urge you to read up the specifications of the Relay Expansion. Improper preparation such as insufficient insulation, wiring errors, or using wire not rated for your application could result in serious damage not limited to injury or fire. We at Onion cannot accept any responsibility for any damages caused by improper use of the Relay Expansion.

Our goal here is to connect a buzzer to the Relay Expansion and a power supply, and then connect a switch to the Omega’s expansion headers. Once it’s set up, we’ll use the code to turn the buzzer on and off.

The switch used here is an SPDT switch - Single Pole, Dual Throw. Single pole means there’s a single power source being switched, dual throw means the power is always connected to one output or the other. The middle pin is the power input, and the two pins on the side are the outputs. Here we’ll just use a single output, leaving the other as open circuit.

In this expriment, we’ll be using the power supplied by our Dock due to easy access. Feel free to try using different power supply methods, but take note you may need voltage dropping resistors for higher powered supplies to avoid burning out the buzzer. If you’re not confident it’ll turn out well, you can just go along with our setup - it’ll work for sure!

For reference, here’s a circuit diagram of our experiment: 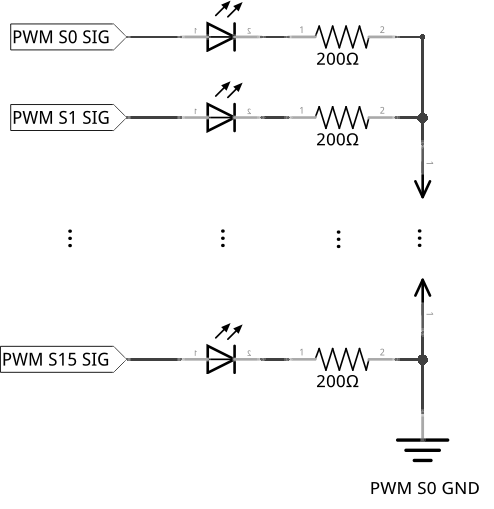 Grab the components listed from your kit, and let’s get wiring! 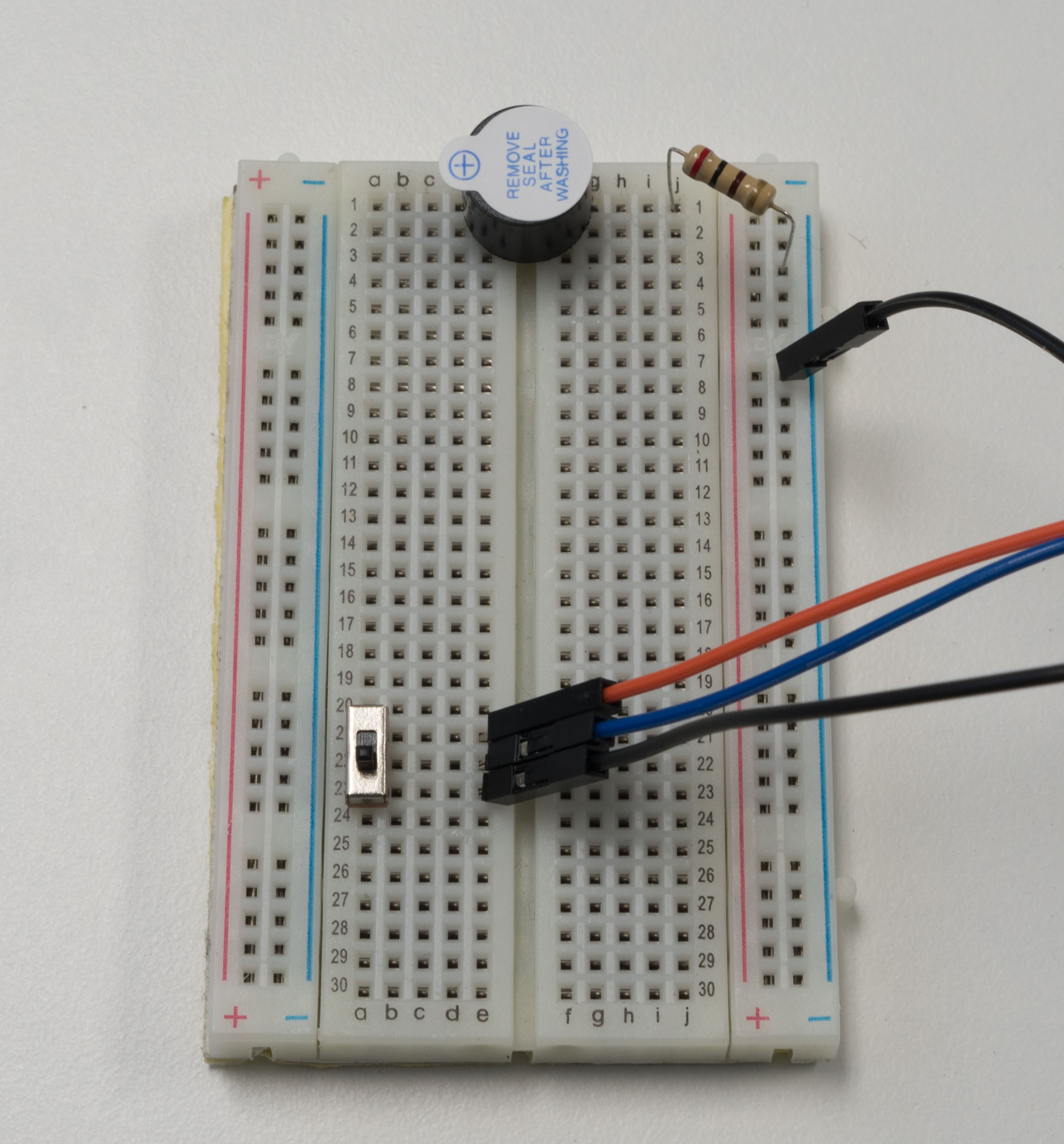 Now let’s connect the buzzer circuit to the Relay Expansion. We’ll be using channel 0, with all switches on the relay set to OFF. We’ve included a diagram below to help out.

Once the relay is set up, let’s connect our circuit to it:

With that, we’re all done!

Here’s a picture of our completed circuit: 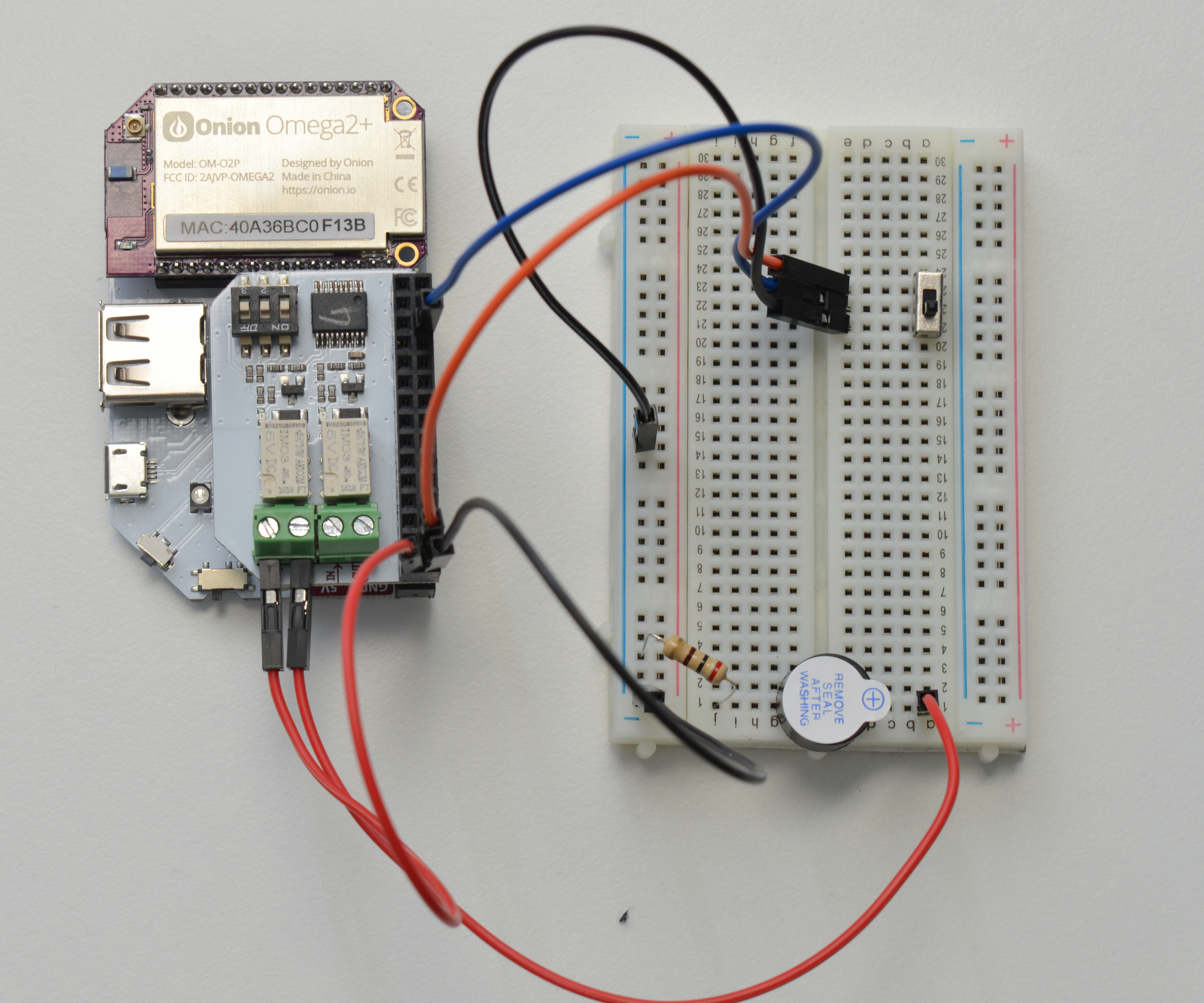 For this experiment, it would be reasonable to assume that we will check the state of the SPDT switch and then set the buzzer accordingly. We won’t be doing that.

Instead, we’ll first read the state of the relay to make sure the state is different from the switch state, and then switch the Relay if needed. We’ll cover why we do this below - but before we do, let’s get to the action!

Create a file called MAK07-relayCircuit.py and paste the following code in it:

When the script is running, you’ll see a ton of debug messages from the console. Now when you flick the switch to on or off, the buzzer should respond by turning on or off appropriately.

Infinite loop appears here as well, and as usual, exit the script with Ctrl-C.

From the PWM expriments, we’ve touched on how to account for the limitations of hardware when writing software. In this expriment we’ve put more of that into practice. One important thing introduced is the Read - Modify - Write cycle. One major part of the cycle is checking status of our components (the ‘read’ part of the cycle). Additionally, we log the status. This is a very good habit to get into for fast debugging because we can use that output to quickly tell if and where something is going wrong.

Almost always, when we want to switch hardware states in software, the program has no implicit knowledge of the state the hardware is in already. To make sure hardware functions properly, and no false signals or badly timed signals are sent, the software should (as a rule) read the state of the hardware first before making changes.

This concept is known as Reading then Writing, and it actually applies to a lot of situations even in software. Multithreading, database updating, and filling and receiving forms all use this concept to try and ensure intended signals are sent, and no false signals get let through.

You’ll notice that of all the code, only about 5 lines are directly dedicated to changing the state of the relay! The bulk of the code is actually all about checking the states and making decisions off of that information. The reason is simple: we want to make sure the commands we send to the hardware are absolutely correct, since hardware errors are difficult to recover from! Software can be written, started, and restarted fairly quickly; but if you burn out an LED, it’s gone for good.

That’s why we consider all the variables in this circuit by reading from the relay and the GPIO pins first and make sure to only change the state of the relay when it’s safe, and it makes sense to do so. Of course when this circuit is properly wired, there’s very little that can go wrong through bad signals, but it’s always good practice to make sure.

In this case, no harm will be done to the Relay by telling it to turn on when it is already on. But this is not always the case, so it’s best to get into the habit now than have something break down the line by forgetting to check state first!

There’s often a great deal of difference between what we expect our software to do versus what our software actually does. Logging is how we can try to match the expected behaviour with actual behaviour. Printing out values of variables, messages of success and failures, we bring what is normally hidden to light. This way, we can follow our code as it runs and make sure it’s doing what we really want.

Let’s say our program has a bug: the relay doesn’t turn on or off when we flip the switch. How would we log the program, what places matter? A good place to start is to print unique messages at different points of the program (especially before and after important lines of code) to let us know what order the program is doing things in. Especially the lines of code relating to the bug.

So for our example bug, if we logged the places where our code is reading and changing of the relay state, we might find that the program isn’t running any code to change the relay state at all! Armed with this information we can then go through the code and try to figure out why - hopefully leading to a solution and getting it to work!

Next time, sky’s the limit!